Program serves for adjustment, diagnostics, calibration, configuration and upgrade firmware performance of the older (no "AP") types of control systems and regulators. Program communicates by RS-232, modem or Ethernet (both UDP and TCP), so it is possible to communicate for example also through internet (some control systems have Ethernet interface directly integrated – for example UniGEN, to any other systems can be connected internet-bridge).
Demo – version disables to connect to equipment, but enables in off-line mode to review monitoring, parameters and configuration of equipment.
Demo - version to get an idea about program supports only some equipment - ignition TMCI2, rotation regulator SpeedCON, network protections NSU and universal equipment (where you can test custom definition of monitor screen).

On monitor screen is displayed actual state of system, measured values and other inputs and outputs. From monitor window it is also possible to control some control systems (keys Start, Stop...). For universal control system (for example control system 900) is design of window fully under command of user (possible to insert bitmap of technological scheme on background and insert on it analog or binary indicators, pumps, three – port valves, that react to assigned value, for example). 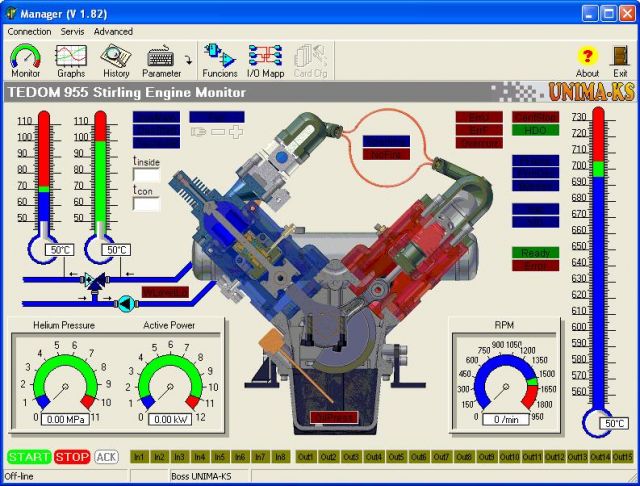 By graphs can be recorded time response of both selected analog and binary values. Time of record 2min÷24h, recorded data can be saved into file and further processed for example in Excel program.

Enables reading recorded history from control system and performing configuration of history (possible to define what values are saved in memory, what is interval of saving data) and pretrigger (in case of malfunction state are recorded in history also records, that preceded this malfunction). 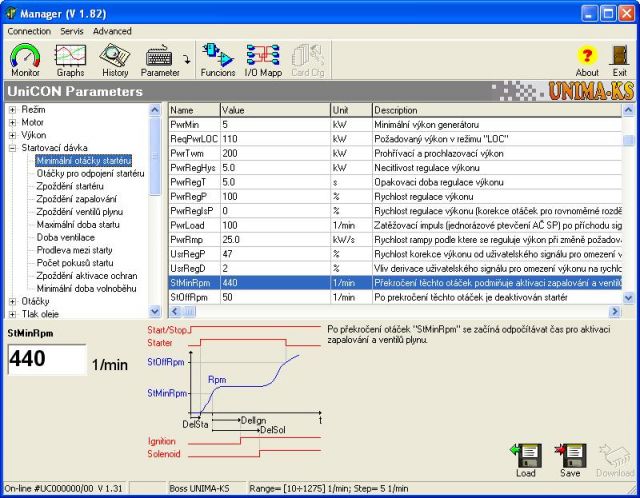 Serves for development (adjustment) of algorithm on custom level (more).

Serves for configuration of analog and binary inputs and outputs. Defines assignation between logical values and physical inputs (more).

Other functions of program:

Note: small control systems or circuits support only some from described functions